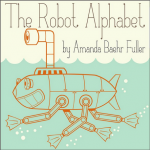 While browsing around Amazon, I stumbled upon The Robot Alphabet by Amanda Baehr Fuller. The cover was so whimsical, that I immediately downloaded the book.

Amanda is a professional designer and illustrator (she has worked on comics for Scholastic and cartoons for Nickelodeon). Her whimsical illustrations drew me (and my boys) in. The robots are funny and quirky; they each have personalities so you can imagine the back story behind the pictures. Although my boys are well past alphabet book age, they both enjoyed looking at the pictures and were inspired to draw their own alphabet robots.

I’m especially fond of the U is for Umbrella robot. His two tiny robot friends are sitting on his head holding a telescoping umbrella. A little homage to Totoro? We had fun speculating about the relationship between the three robots and how they got stuck in the rain.

I thought it was particularly clever that the featured item is the same color as the word (the word ‘Umbrella’ and the umbrella itself are both teal) to helps kids identify which part of the picture is being described.

Amanda has some samples of her work on her website, Mama Robot.

In other news, we are about 80% of the way through The Amulet of Samarkand (audiobook) and we are still thoroughly enjoying it. Simon Jones (the narrator) brings so much to the book. His sardonic Bartimaeus regularly makes me laugh as I’m driving. I know a book is good when it bleeds into real life. While walking around NYC, we saw a burly man standing protectively near a magical-looking doorway. My husband whispered in my ear, “On the 6th plane, he’s not an ordinary guard.”

What’s on the TBR pile this week?
I have to finish Jayawardhana’s Strange New Worlds (NF, science) before my interlibrary loan expires.
And James Dashner’s The Death Cure (dystopian, YA) finally came in so I’m going to read that. Fingers crossed that it has a satisfying ending!
But mostly I am going to be driving kids to swim team, tennis lesson, dive team, gymnastics, and swim meets. Phew.

For more It’s Monday, What Are You Reading, visit Sheila at Book Journey and Kellee and Jen over at Teach Mentor Texts.

This entry was posted in reviews and tagged Amanda Baehn Fuller, It's Monday What Are You Reading, review, The Robot Alphabet. Bookmark the permalink.

9 Responses to The Robot Alphabet