Letters from Gardner by Lou Antonelli

“All the feedback was positive; people said they enjoyed the story, and that I wrote dialogue especially well. That struck a chord and made sense, since as a journalist I interview people all the time. That got the wheels turning upstairs, and I began to think of whether I actually might be able to become a published science fiction author.
The editor who published my first story (“Silvern” in June 2003), Jayme Blashke, commented right off the bat when I first submitted to him, “You seem to have skipped the novice stage of writing.”

Wisdom From My Internet by Michael Z. Williamson

A collection of witticisms from the internet with no context, editorial commentary, or … anything. How is this even a book? Why did anyone think this was one of the 5 most important commentaries on SFF in 2014?

The Mesopotamians designated 40% of grain for beer production. They were also the first great civilization. Coincidence?
Mmmm…schadenfreude! It tastes like someone’s tears!
My parents went to a planet without bilateral symmetry and all I got was this lousy F-shirt.
I can so make fun of reasonable people.
How many reasonable people does it take to change a light-bulb? One.
Unschooling is the theory that kids will figure life out for themselves, just like they did in Lord of the Flies.

“The Hot Equation” by Ken Burnside

Too techy for my taste, but a solid article. Also, eponymous title is eponymous.

“Ignoring thermodynamics is one of the cardinal sins of science fiction authors writing military SF; the same authors who wouldn’t dream of saying that a Colt 1911A fires a .40 caliber bullet will blithely walk into even more galling gaffes through simple ignorance and unquestioned assumptions.”

“Why Science is Never Settled” by Tedd Roberts

A basic introduction to science for non-sciency people. Fine first day of school reading for a middle school or high school science class. XKCD says it more succinctly and entertainingly XKCD: Unscientific and XKCD: The Difference and XKCD: Experimentation (nsfw).

THE HALLMARK OF SCIENCE IS THAT IT IS ALWAYS HYPOTHESIZING, ALWAYS COLLECTING DATA, ALWAYS TESTING, AND ALWAYS REFINING OR LOOKING FOR NEW THEORIES. In fact, the only indication of a good theory is whether one can make valid predictions with the theory. One successful prediction, however, is not enough — after all, just one failed prediction

“What is wrong is that modern though is caught in the disease of nihilism, the idea that there is no revelation.”

“Transhuman and Subhuman” analyzes magic in SFF. In fantasy magic=miracle, in sci fi magic=scientific miracles (“magic is usually not magic at all, but miracle”). I’m not sure why this distinction is necessary to his argument, but John C. Wright proposes that humans are trying to make better, immortal humans. Who would be devils. And that is wrong.

But I did learn something interesting. “High fantasy has a Roman Catholic flavor to it, whereas Sword-and-Sorcery is somewhat Protestant”. Huh.

“The Golden Compass Points in No Direction”  Did he read the same trilogy that I did? 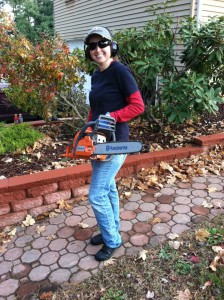 Girls who do not like love stories are well advised to learn to like them, because such stories deal with the essential and paramount realities on which much or most of that girl’s happiness in life will hinge.”

“when women dress and speak and act like men, some joy is erased from both sexes”

“Women will go insane and go into despair if asked to compete at a male task on male terms with male rules.”

I’m doomed. I can neither deal with the reality of my life nor be the heroine in my own story.

[Yes, I know I should be wearing chaps and a helmet. I put them on before I started bucking up the 10+ fallen maples, I promise.]

Ranking
Another race for the bottom. Difficult to figure out which was worse, the word-salad that was Transhuman and Subhuman or the not-a-book that was Wisdom From My Internet. In the end, Wright lost because he put words together in a form that can be described as essay and not just random, unrelated scribblings. Neither “The Hot Equation” nor “Why Science is Never Settled” were important enough to rise above No Award, but “The Hot Equation” came closest.

1) No Award
2) “The Hot Equation” by Ken Burnside
3) “Why Science is Never Settled” by Tedd Roberts
4) Letters from Garnder by Lou Antonelli
5) Transhuman and Subhuman by John C. Wright
6) Wisdom From My Internet by Michael Z. Williamson