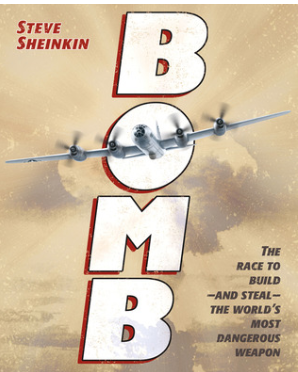 Gearbox needs to read a non-fiction book this summer. Being a huge Sheinkin fan, he picked Bomb: The Race to Build—and Steal—the World’s Most Dangerous Weapon. It arrived in the mail today and I immediately stole it and read it before he could get his hands on it because that’s the kind of mother I am.

Bomb, like other Sheinkin books, brings an era to life in a way that is both fascinating and informative. Sheinkin has a rare gift; his non-fiction is as gripping as a novel you’d bring to the beach. The story follows three threads: the attempt to make the bomb, the attempt to keep the Germans from making the bomb, and the attempt by the Soviets to steal the bomb technology.

While most of the story is a tense and thrilling spy thriller, the descriptions of the devastation at Hiroshima and Nagasaki are painful and effectively convey the horror of the bomb blast:

“Just as my brother reached out a catch the dragonfly, there was a flash. I felt like I’d suddenly been blown into a furnace… When I opened my eyes after being flung eight yards, it was still as dark as if I were facing a wall painted black.” [p195]

This eye-witness quotation reminded me of Ray Bradbuy’s post-apocalyptic short story “There will come soft rains”. In Bradbury’s dystopian short, a heavily automated house goes about it’s daily tasks of getting a family ready for the day long after the family is gone. Eventually the reader learns that the family was killed in a nuclear blast:

“The entire west face of the house was black, save for five places. Here the silhouette in paint of a man mowing a lawn. Here, as in a photograph, a woman bent to pick up flowers. Still farther over, their images burned on wood in one titanic instant, a small boy, hands flung into the air higher up, the image of a thrown ball, and opposite him, a girl, hands raised to catch a ball which never came down.”

In the story, the house recites a Sarah Teasdale poem that was inspired by the horrors of WW1:

There Will Come Soft Rains

There will come soft rains and the smell of the ground,
And swallows circling with their shimmering sound;

And frogs in the pools singing at night,
And wild plum trees in tremulous white;

Robins will wear their feathery fire,
Whistling their whims on a low fence-wire;

And not one will know of the war, not one
Will care at last when it is done.

Not one would mind, neither bird nor tree,
If mankind perished utterly;

And Spring herself, when she woke at dawn
Would scarcely know that we were gone.

For more Poetry Friday, visit Amy at The Poem Farm.