Witches: It’s Monday, What Are You Reading? 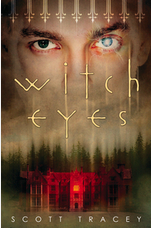 After being raised by his uncle, Braden returns to his hometown where he finds himself drawn into a feud between the two warring witch clans that control the town.

Braden is a great character. He is quirky, funny, and real. The author gives him enough backstory and depth to be sympathetic, believable, and intriguing. And he’s a butt-kicking witch with rare, special magic. Naturally.

Speaking of magic, the magic in this book is weird. Braden has ‘witch’ eyes — when he takes off his glasses, he has overwhelming visions of the present and past. He can see and unravel other’s magic and copy it based on seeing it’s structure. The descriptions of Braden’s magic are strange — full of color, snippets of visuals, and light. I am going to assume that the disorienting descriptions are deliberate since using his magic wears out Braden and gives him migraines that confine him to bed. I’m not sure if the descriptions worked for me.

I love Braden and Trey’s Romeo-and-Juliet-esque relationship. YA characters falling in love at first sight and immediately becoming bonded soulmates is a pet peeve of mine so I really liked that Braden and Trey’s feelings for each other are given time to grow. Their connection believable and I have my fingers crossed that things will work out for them.

I gave the book 4★ for pulling me in, but it’s a weak 4 teetering on 3. The pacing is a little slow at times and some of the reveals could have been handled more organically… but it’s a debut novel so I’m hoping this author’s writing will get stronger as the series progresses. The next book (Demon Eyes) comes out in October. I’m waiting.

Gearbox and I are still working our way through Origami X (MG, how-to, origami, spies, ARC) by Nick Robinson. He’s a good origami folder, so he is testing the instructions for me!

What’s on my TBR Pile:

9 Responses to Witches: It’s Monday, What Are You Reading?