Camping, the Klondike, and cold

This weekend my son is going on a klondike-themed scout trip. The troop will be trying their hands at goldrush-themed activities, camping in the cold, and earning their blue nose badges. Camping in the cold reminds me of college and reciting The Shooting of Dan McGrew around the campfire. The first time I heard this poem was around a campfire my freshman year in college. It was recited so beautifully it gave me chills and I immediate memorized it so I could recite it when I led trips. I’ve brought it out on summer camping trips with my own kids but it works better under cold, winter skies.

The Shooting of Dan McGrew by Robert Service

A bunch of the boys were whooping it up in the Malamute saloon;
The kid that handles the music-box was hitting a jag-time tune;
Back of the bar, in a solo game, sat Dangerous Dan McGrew,
And watching his luck was his light-o’-love, the lady that’s known as Lou.

When out of the night, which was fifty below, and into the din and the glare,
There stumbled a miner fresh from the creeks, dog-dirty, and loaded for bear.
He looked like a man with a foot in the grave and scarcely the strength of a louse,
Yet he tilted a poke of dust on the bar, and he called for drinks for the house.
There was none could place the stranger’s face, though we searched ourselves for a clue;
But we drank his health, and the last to drink was Dangerous Dan McGrew.

There’s men that somehow just grip your eyes, and hold them hard like a spell;
And such was he, and he looked to me like a man who had lived in hell;
With a face most hair, and the dreary stare of a dog whose day is done,
As he watered the green stuff in his glass, and the drops fell one by one.
Then I got to figgering who he was, and wondering what he’d do,
And I turned my head — and there watching him was the lady that’s known as Lou.

His eyes went rubbering round the room, and he seemed in a kind of daze,
Till at last that old piano fell in the way of his wandering gaze.
The rag-time kid was having a drink; there was no one else on the stool,
So the stranger stumbles across the room, and flops down there like a fool.
In a buckskin shirt that was glazed with dirt he sat, and I saw him sway;
Then he clutched the keys with his talon hands — my God! but that man could play.

Were you ever out in the Great Alone, when the moon was awful clear,
And the icy mountains hemmed you in with a silence you most could hear;
With only the howl of a timber wolf, and you camped there in the cold,
A half-dead thing in a stark, dead world, clean mad for the muck called gold;
While high overhead, green, yellow and red, the North Lights swept in bars? —
Then you’ve a haunch what the music meant. . . hunger and night and the stars.

And hunger not of the belly kind, that’s banished with bacon and beans,
But the gnawing hunger of lonely men for a home and all that it means;
For a fireside far from the cares that are, four walls and a roof above;
But oh! so cramful of cosy joy, and crowned with a woman’s love —
A woman dearer than all the world, and true as Heaven is true —
(God! how ghastly she looks through her rouge, — the lady that’s known as Lou.)

Then on a sudden the music changed, so soft that you scarce could hear;
But you felt that your life had been looted clean of all that it once held dear;
That someone had stolen the woman you loved; that her love was a devil’s lie;
That your guts were gone, and the best for you was to crawl away and die.
‘Twas the crowning cry of a heart’s despair, and it thrilled you through and through —
“I guess I’ll make it a spread misere”, said Dangerous Dan McGrew.

The music almost died away … then it burst like a pent-up flood;
And it seemed to say, “Repay, repay,” and my eyes were blind with blood.
The thought came back of an ancient wrong, and it stung like a frozen lash,
And the lust awoke to kill, to kill … then the music stopped with a crash,
And the stranger turned, and his eyes they burned in a most peculiar way;
In a buckskin shirt that was glazed with dirt he sat, and I saw him sway;
Then his lips went in in a kind of grin, and he spoke, and his voice was calm,
And “Boys,” says he, “you don’t know me, and none of you care a damn;
But I want to state, and my words are straight, and I’ll bet my poke they’re true,
That one of you is a hound of hell. . .and that one is Dan McGrew.”

These are the simple facts of the case, and I guess I ought to know.
They say that the stranger was crazed with “hooch,” and I’m not denying it’s so.
I’m not so wise as the lawyer guys, but strictly between us two —
The woman that kissed him and — pinched his poke — was the lady that’s known as Lou. 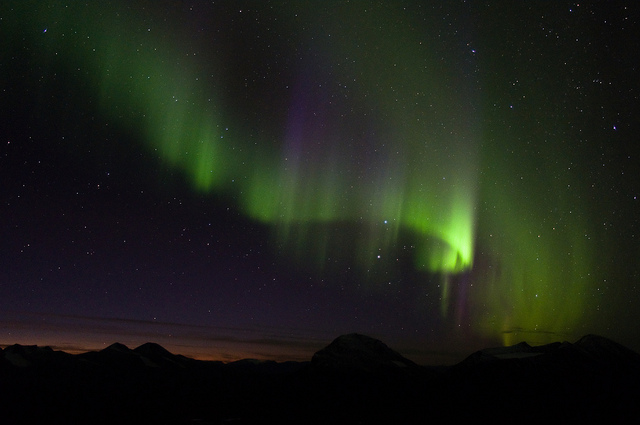 This photo of the northern lights was taken in Sweden by an amazing photographer and adventurer — Joery Truyen. His blog chronicles his backpacking trips in northern Europe and is full of gorgeous photographs. All of his featured pictures are so beautifully shot and composed.

For more Poetry Friday, head over to Teaching Authors and see what our wonderful host April Wayland has put together for us.

8 Responses to Camping, the Klondike, and cold